BACK TO THE GRID 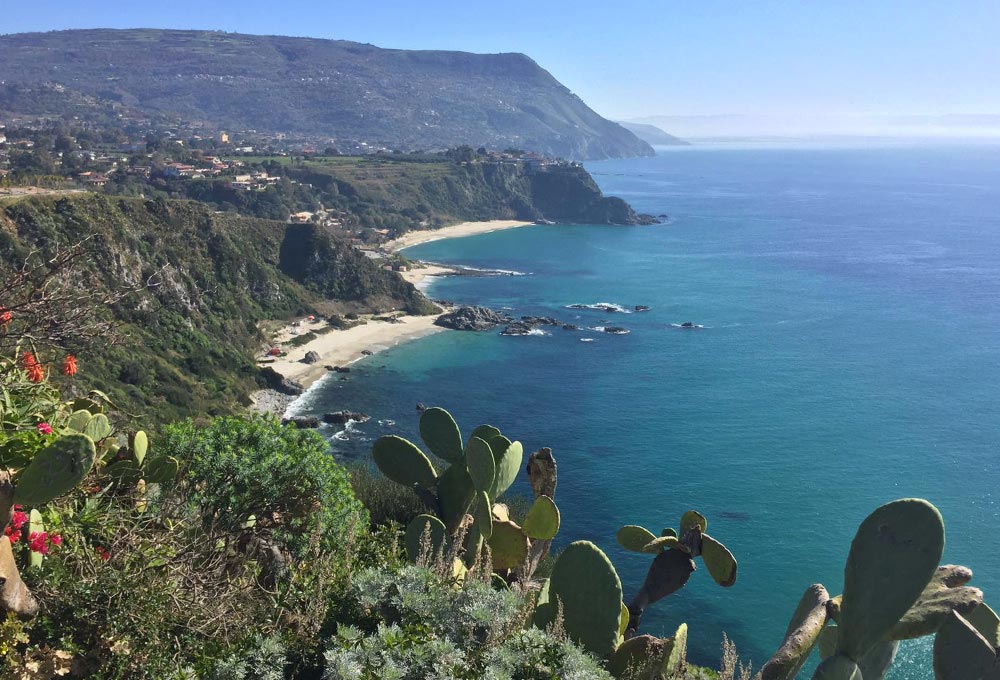 At the point where the Sant'Eufemia Gulf meets the southern-most corner, rises one of the most photographed headlands in Italy: Capo Vaticano.

According to an ancient legend from the Greek era, the place hosted an oracle, prophet Manto, who used to welcome visitors to one of the many caves that highlight the high cliffs. It is thought that even Ulysses, during his epic journey in the Mediterranean, stopped here to consult the oracle and get a vaticinium (hence the name), a prediction of the future. Moreover, according to some scholars, it was here that the terrible mermaids lived who would bewitch the companions of the Greek hero.

Nowadays, the headland has maintained the character of charm and mystery that has always encapsulated its boundaries. There are numerous vantage points from which to enjoy breathtaking scenery on the Aeolian Islands and on Sicily. On clear days, you can see even three active volcanoes: Etna, the island of Vulcano and the island of Stromboli. The sunsets over these volcanoes are like gentle caresses that will accompany lucky viewers for the rest of their lives.

The most popular beach is undoubtedly that of Grotticelle, where there are numerous bathing facilities, but the so-called Praja 'i focu, the Beach of fire, is very characteristic. This is a corner of paradise reachable only by sea and, consequently, almost untouched.

Because of its unrivalled beauty, Capo Vaticano has always attracted the most sensitive souls; it was the home of the well-known Venetian writer Giuseppe Berto, among the most illustrious of the twentieth century. In memory of the late author, every two years (alternating with Mogliano Veneto) Capo Vaticano hosts a literary competition dedicated to new writers.

FOR MORE INFORMATION CALL NOW
FIND OUT ABOUT OUR GREAT RATES
YOU HAVEN'T SEEN OUR DEALS YET? Click here

CALL US WITHOUT OBLIGATION

QUESTIONS? WRITE TO US NOW